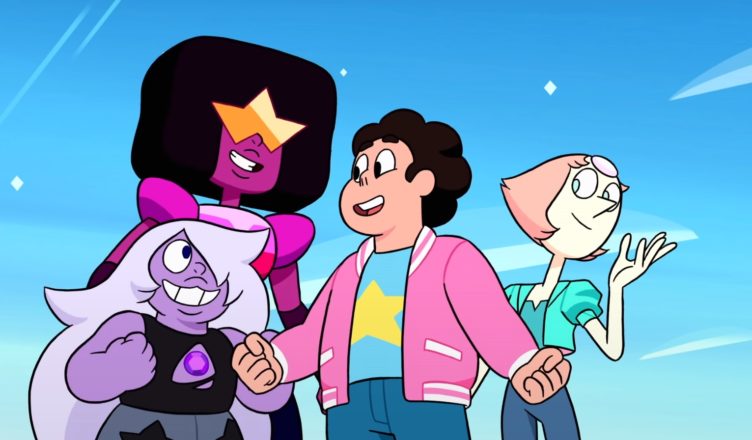 Happily Ever After is a song from musical television film “Steven Universe: The Movie” which is based on the Cartoon Network TV Series “Steven Universe”. The song is sung by Steven, Garnet, Amethyst and Pearl and performed by Zach Callison, Estelle, Michaela Dietz and Deedee Magno-Hall.

Happily Ever After Lyrics

Pearl: Once upon a time, I only lived to be of Pink Diamond’s service
Till the day the two of us snuck down to be on this planet’s surface
We became our fantasy
And I was sure she set me free
But in the end I guess I never left her side
And after love and loss and all the tears that I cried
I find that
Steven and Pearl: Here we are in the future!

Garnet: Once upon a time, a Sapphire came to Earth with her Ruby soldier
Sapphire’s deadly fate was set until the Ruby rushed in to hold her
Suddenly, they were fusing
Beautiful, strange, confusing
And there I was, a bundle of questions, so naïve
That if you told me this I never would have believed you then, but
Steven and Garnet: Here we are in the future!

Amethyst: Once upon a time, I burst to life inside of the Kindergarten
Product of a war that I had no idea I had a part in
I came out late and alone
Knew nothing but my home
But I know now exactly who I’m s’posed to be
And it’s a part of this family!

Back To All Steven Universe: The Movie Songs

Fearless (Lucky's version)
Pick Me
Who Is She? (Reprise)
You're In My Head Like a Catchy Song