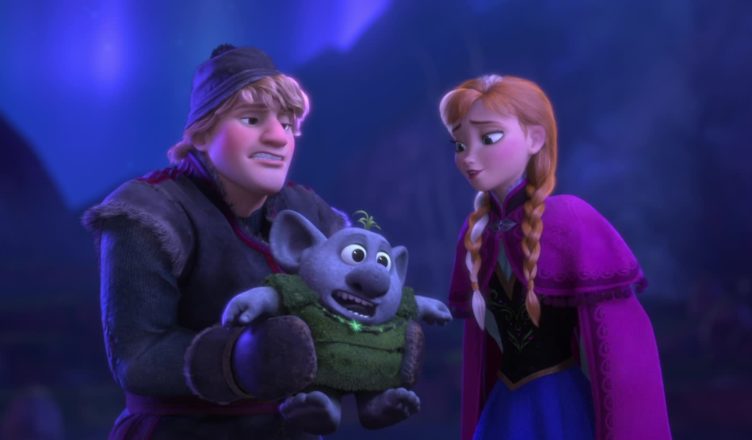 Fixer Upper is a song from Disney movie “Frozen“. It is sung by trolls and performed by Maia Wilson and Frozen Cast.

Bulda: What’s the issue, dear?
Why are you holding back from such a man?
Is it the clumpy way he walks?
Cliff: Or the grumpy way he talks?
Trolls: Or the pear-shaped, square-shaped
Weirdness of his feet?
And though we know he washes
Well – he always ends up sort of smell-y.
Bulda: But you’ll never meet a fellow who’s as
Bulda and Cliff:Sensitive and sweet!

Bulda, Cliff: So he’s a bit of a fixer-upper,
So he’s got a few flaws.
Female Troll 2: Like his peculiar brain dear,
Male Troll 2: His thing with the reindeer.
Troll Duet: That’s a little outside of nature’s laws!

Small Group of Trolls: So he’s a bit of a fixer-upper,
but this we’re certain of
You can fix this fixer-upper
Up with a little bit of love!

Kristoff: Can we please just
Stop talking about this?
We’ve got a real, actual problem here.

Bulda: I’ll say! So tell me, dear
Is it the way that he runs scared?
Troll: Or that he’s socially impaired?
Troll Child: Or that he only likes to tinkle in the woods
Anna: I did not need to know that…

Cliff: Are you holding back your
Fondness due to his unmanly blondness?
Female Trolls: Or the way he covers
Up that he’s the honest goods?

Kristoff: ENOUGH! She is engaged
to someone else, okay?!

Bulda: We’re not sayin’ you can change him,
‘Cause people don’t really change.
We’re only saying that love’s a force
That’s powerful and strange.
People make bad choices if they’re mad,
Or scared, or stressed.
Throw a little love their way.

Troll Priest: Do you, Anna, take Kristoff to be your troll-fully wedded?
Anna: Wait, what!?
Troll Priest: You’re getting married!
Trolls: Love!

Back To All Frozen Songs