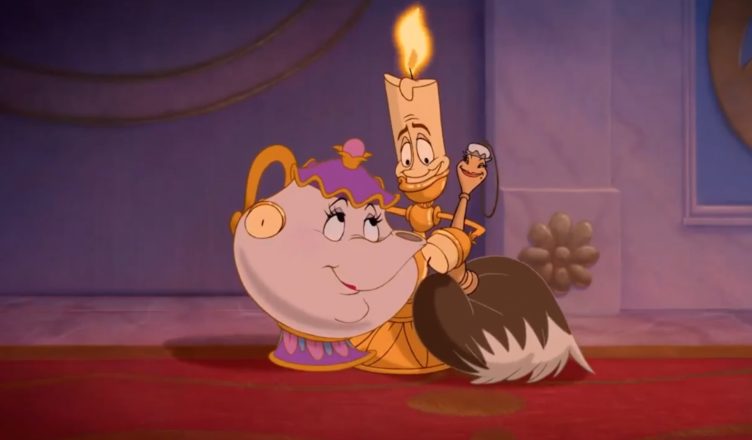 Human Again is a deleted song from Beauty and the Beast that was restored in the 2002 Special Edition released on IMAX and the Special Platinum Edition DVD. The song is sung by Lumiere, Mrs. Potts and Cogsworth and others and performed by Jerry Orbach, Angela Lansbury and David Ogden Stiers and others.

Cogsworth: Right then! You all know why we’re here. We have exactly 12 hours, 36 minutes, and 15 seconds to create the most magical, spontaneous, romantic atmosphere known to man or beast. (Chuckles weakly) “Or beast..” Right. Need I remind you that if the last petal falls from this rose, the spell will never be broken! Very well. You all know your assignments. Half of you to the West Wing, half of you to the East Wing, the rest of you, come with me.
Lumiere: Hoho, lighten up Cogsworth and let nature take its course.
Mrs. Potts: It’s obvious there’s a spark between them.
Cogsworth: Yes yes yes… But there’s no harm in fanning the flames. You know, a little. Besides, they must fall in love tonight if we ever expect to be human again.
Lumiere: Aaah…human again…
Mrs. Potts: Human again…
Lumiere: Yes, think what that means…

Lumiere: I’ll be cooking again, be good-looking again,
With a mademoiselle on each arm
When I’m human again, only human again
Poised and polish and gleaming with charm
I’ll be courting again, chic and sporting again
Mrs. Potts: Which should cause several husbands alarm
Lumiere: (Ha, ha!) I’ll hop down off this shelf, and tout de suite be myself,
Lumiere, Mrs. Potts and Cogsworth: I can’t wait to be human again

Mrs. Potts & Cogsworth: When we’re human again, only human again
When the world once more starts making sense
Cogsworth: I’ll unwind, for a change
Lumiere: (Really? That’d be strange)
Cogsworth: Can I help it if I’m t-t-tense?
In a shack by the sea, I’ll sit back, sipping tea
Let my early retirement commence
Far from fools made of wax, I’ll get down to brass tacks and real-A-A-A-x!
Chorus: When I’m human again!

So sweep the dust from the floor
Let’s let some light in the room
I can feel, I can tell someone might break the spell any day now

Fifi and the maids: Open the shutters and let in some air
Mrs. Potts: Put these here and put those over there
Chorus: Sweep up the years, the sadness and tears and throw them away

Belle: “…For there never was a story of more woe than this of Juliet and her Romeo.”
Beast: Could you read it again?
Belle: Well, here. Why don’t you read it to me?
Beast: Uhhh…Alright.
Hmm…I-I can’t.
Belle: You mean you never learned?
Beast: I learned, a little. It’s just been so long.
Belle: Well here, I’ll help you. Let’s start…here.
Beast: Here, twoe…?
Belle: Two.
Beast: Two, I knew that. Two households, both alike in dignity…

Like a real human does, I’ll be all that I was
On that glorious morn, when we’re finally re-born
And we’re all of us human again!