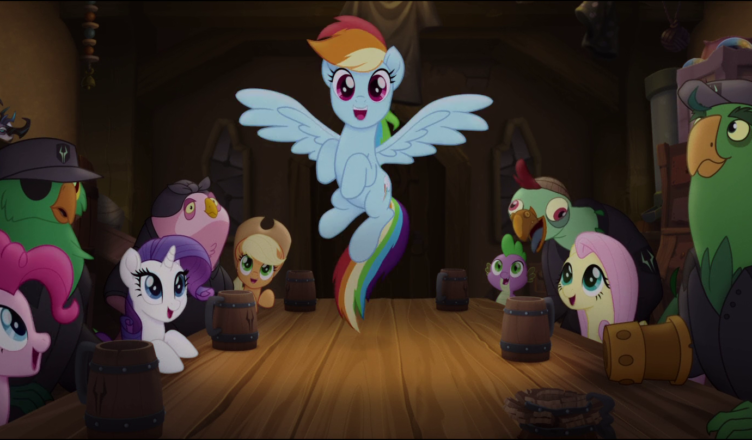 Time to Be Awesome is the fourth song from My Little Pony The Movie. It is sung by Rainbow Dash and Captain Celaeno, Rainbow Dash sings it to inspire Celaeno and her former pirate crew to renounce their servitude to the Storm King and become pirates again. The song performed by Ashleigh Ball, Zoe Saldana and others.

Time to Be Awesome Lyrics

Rainbow Dash:
I know the world can get you down
Things don’t work out quite the way that you thought
Feeling like all your best days are done
Your fears and doubts are all you’ve got
But there’s a light shining deep inside
Beneath those fears and doubts, so just squash ’em
And let it shine for all the world to see
That it is time, yeah, time to be awesome

Captain Celaeno:
You’ve no idea how hard it’s been
Ponies: (It’s time to be awesome!)

Captain Celaeno:
This dull routine we’ve been forced to do
Rainbow Dash:
Don’t let them rob you of who you are
Be awesome, it’s all up to you
Captain Celaeno:
I feel the light stirring deep inside
It’s like a tale still yet to be told
Ponies: (It’s time to be awesome!)

Other My Little Pony The Movie Songs