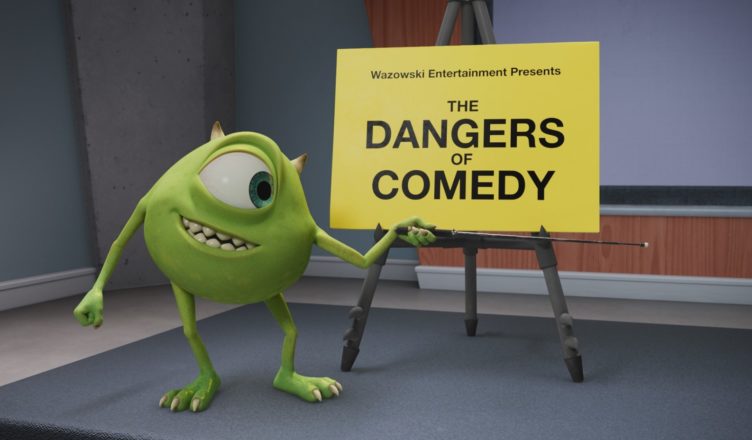 Comedy Can Be Dangerous is an song from Disney Plus Original Series “Monsters At Work” season 1 episode “Meet Mift”. The song is sung by Mike Wazowski and performed by Billy Crystal.

Comedy Can Be Dangerous Lyrics

Mike Wazowski:
Comedy can be dangerous, my friends
I’ll tell you why
When kids laugh and giggle
They could split a gut
With a chortle, they could crack up
Beware, there is the chance
You could make a kid laugh so hard
They’d pee their pants

Fall out of bed, hit their head
While rolling on the floor
Their bodies shake, sides will ache
They’ll laugh until they’re sore
There’s a funny bone, a danger zone
Someplace no one knows
If you hit that zone, hold the phone
Milk shoots out their nose

Kids are fragile
Careful not to scoff
Your joke can make
Their heads and butts fall off
Jokes and gags hit ’em hard
With punch lines, so I’ve read
You could leave a kid in stitches
Or even knock ’em dead

-Knock-knock.
-Who’s there?
-Police.
-Police, who?
Police end this song.

Comedy Can Be Dangerous Soundtrack Version

Back To All Monsters at Work Songs