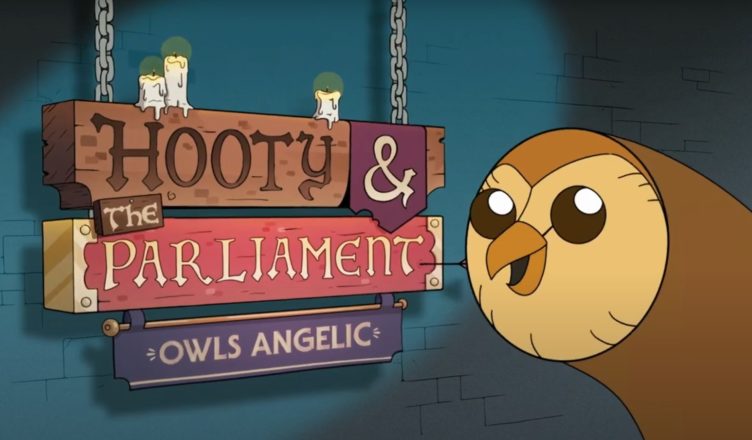 Hooty and the Parliament Owls Angelic is a song from Disney TV series The Owl House. It’s a parody of the song “Our House” that was published by Disney Channel on its YouTube channel. The song is sung by Hooty and performed by Alex Hirsch.

Eda’s soaring on her staff
King of Demons gives a laugh
Luz is conjuring up downstairs
The only human on the scene (Ahh, ahh, ahh)
She’s the new witch to enlist
under Eda’s wing

Owl House is quite the place
A witch’s secret hideaway
with friends in every space
Luz is training to keep pace (Ahh, ahh, ahh)
Her human world has been replaced
The Owl House is her home base…it’s…

Spells and hexes, runes and charms
Demons that can do you harm,
School is in, ring the alarm
It all gets stranger every day… (Ahh, ahh, ahh)
But with Eda and King there with her,
she’ll always find a way…

When Luz went through the portal
no one ever would of thought of all of the things she’d see,
the monsters and all the demons
(King: Grim demons!)
But, now she has a goal in mind,
the greatest witch of her own kind
and she knows she’ll never stop believin’
(King: And sweet demons!)

Eda’s soaring on her staff
King of Demons gives a laugh
Luz is conjuring up downstairs
If you’re wanting to see more (Ahh, ahh, ahh)
Take the portal and look for
an owl’s face inside a door

Back To All The Owl House Songs

One thought on “Hooty and the Parliament Owls Angelic”