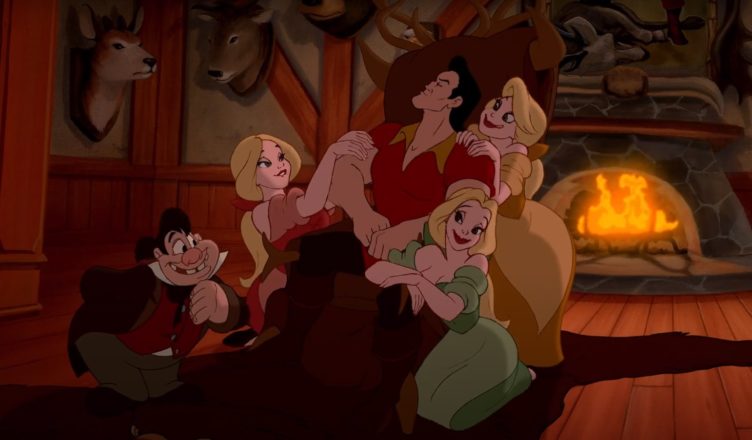 LeFou: Gosh, it disturbs me to see you, Gaston
Looking so down in the dumps
Every guy here’d love to be you, Gaston
Even when taking your lumps
There’s no man in town as admired as you
You’re everyone’s favorite guy
Everyone’s awed and inspired by you
And it’s not very hard to see why!

Chorus: No one fights like Gaston
Douses lights like Gaston
In a wrestling match nobody bites like Gaston!
Bimbettes: For there’s no one as burly and brawny
Gaston: As you see, I’ve got biceps to spare
LeFou: Not a bit of him’s scraggly or scrawny.
Gaston: That’s right!
And every last inch of me’s covered with hair!

Gaston: When I was a lad I ate four dozen eggs
Ev’ry morning to help me get large
And now that I’m grown I eat five dozen eggs
So I’m roughly the size of a barge

[Heard only in the soundtrack version]
Chorus:
Say it again!
Who’s a man among men?
And then say it once more
Who’s that hero next door?
Who’s a super success?
Don’t you know? Can’t you guess?
Ask his fans and his five hangers-on
There’s just one guy in town
Who’s got all of it down…
LeFou: And his name’s G-A-S… T…
G-A-S-T-E…
G-A-S-T-O… ohh, ow…
Chorus: GASTON!!!

[Heard only in the film version]
Chorus: My what a guy!
GASTON!