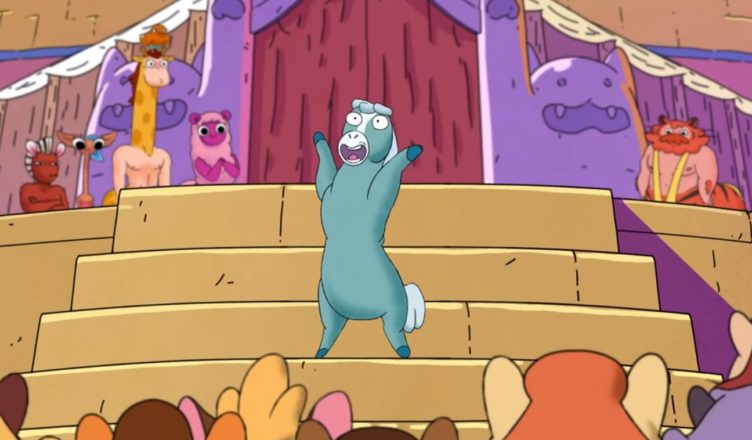 Horse’s Recruitment Song (Season 1 Recap Song) is a song from Netflix Original Series “Centaurworld” season 2 episode 1 “Horsatia Wighair Beansz”. The song is sung by Horse and performed by Kimiko Glenn. The song was released on November 12, 2021 on Youtube before the season 2 premiere.

Horse: I’d like to bring you up to date
On my adventures as of late
When last I saw you
I was looking for the pieces of the key
You see, I found them all
And then I found my Rider
We went home together, but we got stuck
In the Nowhere Place between the portals

There inside the Rift
The Nowhere King was lurking
Waiting to be freed
And accidentally, I released him
Whoopsie-daisy!
Here’s the rub
He’s coming now, he’s got an army
And we’ll need one too
So I returned to Centaurworld
To hopefully recruit you all to fight

Moletaur: Your problems
Don’t concern the underground
But your interruptions here
Are quite upsetting (Moist)
You clearly can’t read the room
But if you take a look around
You’ll see you and your herd
Just crashed a moletaur wedding
Comfortauble Doug: I mean, come on
Horse: Okay, yeah. Uh, guys, this is totally a wedding.
Wammawink: What?
Horse: Yeah, I see that now.
Wammawink: Oh, my gosh.
We’re so sorry.
Horse: You got a little dress on and everything.
B… But anyway, since, uh, I’m already here…

Horse: I was hoping to recruit you all
To fight the war
Moletaur: What war?
Horse: War that’s coming
There’s a horde with swords
Minotaurs will set this place ablaze
Cataur: No way
Can we bake s’mores?
Horse: No! Not that kind of fire
It’s the kind that kills and harms
I’ve seen it in my world so many times
We must prepare an army

So
I’d like to invite you all
To join us in the fight
‘Cause if you don’t
Then you maybe will die
And you maybe will anyway
Glitter cats: Me?
Horse: The little one
Cataur: She’s talking to you
Horse: No, not you, that one
Maybe both of you
If I’m being perfectly honest

Ched: Way to flonkin’ go, Horse!
I do not need this right now.
You’re scarin’ everyone to death
Big surprise
Wammawink: You brought us back to the beartaur?”
Horse: Look, we can’t pick and choose.
We need everyone.
Zulius: I am not going in there.
Durpleton: Me neither.
Glendale: I’m not going in there.
Wammawink: This is your thing. You go in. I’m not going.
Horse: He tried to make me part of his collection.

Shamans: The last time you were here
All you did was kick and steal from us
All you did was kick a tree
And steal our stuff
Horse: Okay, you’re right.
I… I’m sorry.
Shamans: How does it feel to kick a tree?
We don’t know because we’re trees
And we don’t kick each other
Horse: I’m… I’m sorry.
Ched: Yeah, I told you we never should’ve done that.
Horse: What? No, you didn’t.
You kicked her too.
Shamans: We don’t steal from each other
Ched: I didn’t have anything to do with that.
That was all Horse.
Horse: I should’ve kicked you, Ched!
Shamans: If you’re askin’ for our help\nThen we say no
Horse: No?
Everyone: No
Horse: Okay. Thank you for your time. I guess