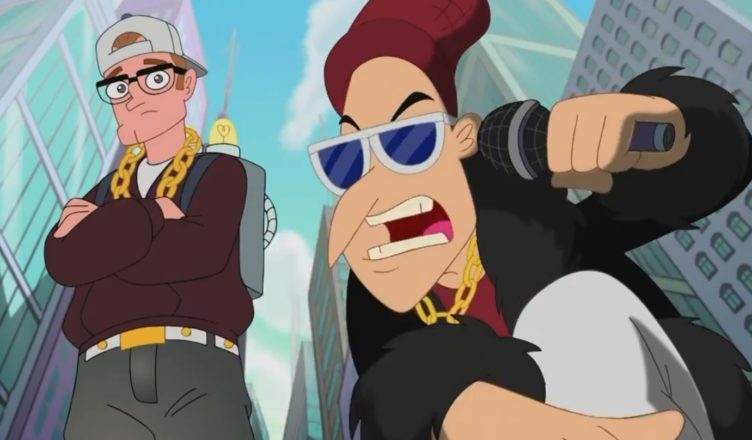 Lot of Pressure is a song from Disney TV Show “Milo Murphy’s Law” season 2 episode 1 “The Phineas and Ferb Effect”. The song is sung by Heinz Doofenshmirtz and Orton Mahlson and performed by Dan Povenmire and Jemaine Clement.

Orton: They say I’m gonna have a big hit show with a legion of super fans!
I’ll be an icon on the modern television!
Sure, writing was my goal, but I’ll be honest; I was making backup plans.
‘Cause they say write what you know, but all I knew was the zoning commission!
And it should be nice to know that everything will work out fine!
And I’m gonna be a national treasure.
…Apparently!
But now there’s all these expectations that I’ll just… I’ll have to realign!
And there’s this future self up to which I have to measure.
It’s just a lot of pressure…

Doofenshmirtz:  Yeah, yeah, you know, you think you got it bad? You got nothin’ on me, buddy!
Listen.

So apparently I’m gonna be the one who’ll finally figure out time travel.
Now that’s a ton of scientific mysteries that I’ll have to somehow unravel!
They’ll call me “Professor Time”. There’ll be statues of me on every square,
So, no matter where I go- oh look!- I’m already there!
Is that what I look like from this angle? Hm.
And it should be nice to know that everything will work out fine!
And I’m gonna be a national treasure!
But now there’s all these expectations that I’ll just… have to realign!
And there’s this future self up to which I have to measure!
Oy vey!
It’s just a lot of pressure…

Yo, yo, and who knew we’d be essential? That we’d have so much potential?!
Orton:  We could be so influential, our actions consequential!
Doof: Without any recredentials, I can tell you confidentially
that you and me might have the quality
to achieve a high degree of notoriety!
Orton: And get our names on the marquee of high society
Doof: And I know that now we seem like idiots
Orton: But in the nitty-gritty,
it’s so fortunate we’re witty it’s gonna (Yo, yo!) make us giddy
when we¡re someday sitting pretty! But we should be working steady,
getting sweaty to get ready for a future that’s so heady. Yes.
Doof: It’s a daunting proposition (Mhm) to be in this position (That’s correct)
where we heard this premonition (Correct) of our future self’s condition (Yes!)
So I’ll make this one admission, though the beat is never slowing- I…
I forgot where I was going with this.
Orton: It’s a lot of pressure.
Doof: Oh, yeah!
Both:  It’s just a lot of pressure!