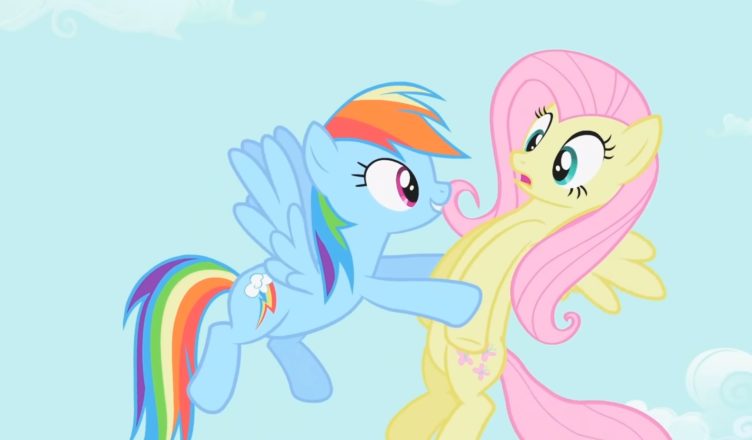 May the Best Pet Win Lyrics

Fluttershy:
Now, Rainbow, my dear, I cannot express my delight
It’s abundantly clear
That somewhere out here
Is the pet that will suit you just right
Rainbow Dash:
I can’t wait to get started, but first let me set a few rules
It’s of utmost importance
The pet that I get
Is something that’s awesome and cool

Fluttershy: Awesome, cool, got it!
I have so many wonderful choices, just wait, you will see
Rainbow Dash:
I need something real fast like a bullet to keep up with me
Fluttershy:
Sure! How ’bout a bunny?
They’re cutesy and wootsie and quick as can be
Rainbow Dash:
Cutesy? Wootsie? Have you even met me?
Fluttershy:
Rainbow, have faith
You see, I will bet you
Somewhere in here is the pet that will get you

Fluttershy: Come on, the sky’s the limit!
Rainbow Dash: Sky is good. I’d like it to fly.
Fluttershy: Really? Because I think this widdle puddy tat has your name written all over it.
Yes, he does. Aww, look, he likes you!
Rainbow Dash: Pass.

Fluttershy:
I have so many wonderful choices for you to decide
There are otters and seals
With massive appeal
Rainbow Dash: Otters and seals do not fly.
Fluttershy: Maybe not, but I’ve seen this particular seal catch ten feet of air when he breaches the water!
Rainbow Dash: That’s it. I’m outta here.

Fluttershy: Wait! There must be a pet here
That will fit the ticket
How ’bout a ladybug, or a cute cricket?
Rainbow Dash: Bigger. And cooler.

Fluttershy: Bigger, cooler. Right.
I’ve got just the thing in that tree, Dash
Meet your new fabulous pet, Squirrely!
Rainbow Dash: It’s just a squirrel.
Fluttershy: Not just any squirrel. A flying squirrel!
Rainbow Dash: …Yeah. So, like I was saying…

Fluttershy, pal, this won’t cut it
I need a pet to keep up with me
Something awesome, something flying
With coolness that defies gravity!
Fluttershy: I’m sensing you want an animal that can fly.
Rainbow Dash: Ya think?

Fluttershy:
I have plenty of wonderful creatures who soar in the sky
Like a sweet hummingbird or a giant monarch butterfly
Rainbow Dash: Better, but cooler.
Fluttershy:
I see. How ’bout an owl, or a wasp, or a toucan?
There’s so many wonderful creatures the likes of that
There are falcons and eagles
They are both quite regal
Or perhaps what you need is a dark and mysterious bat?

Rainbow Dash: Now you’re talking! But instead of just one standout, now that’s too many.
So many choices, and such riches aplenty
Fluttershy: Not a bad problem to have, if you ask me.

Rainbow Dash: The bat would be awesome, but the wasp I’m digging too
Do you have something in a yellow striped bat?
Fluttershy: No.
I’ve got a hot pink flamingo, just dying to meet you
Rainbow Dash:
What to do, what to do?

A prize! That’s it! There’s really just one way
To find out which animal’s best
Hold a contest of speed, agility, and guts
That will put each pet to the test

Fluttershy: Don’t forget style, that should be considered
Rainbow Dash: Then we’ll know for sure who’s best of the litter
Fluttershy: The one who is awesomest cool
Rainbow Dash: Just like me

Back To Other Season 2 Songs