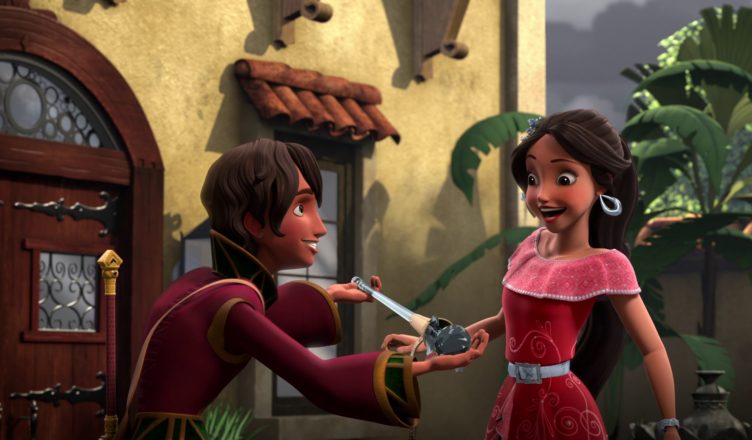 Never Too Late is a song from Elena Of Avalor Finale season 3 episode 28 TV Movie “Coronation Day“. It is sung by Elena and Esteban and performed by Aimee Carrero and Cristian Lanz.

Elena: I always thought I had to have the answer
Be on my best behavior
I had to play the perfect ruler
Or I would be a total failure
But now I’ve gone and let my anger
Put everyone in danger
Once again

Esteban: I always thought that if I had more power
Life wouldn’t feel so sour
Now I have lost my whole familia
And all along I’ve been a coward
I only wanted them to hear me
But they will only fear me
Once again

Elena: But it is never too late
To say you made a mistake
Find the will to try again
‘Cause even though you ache
If you find What went wrong
And sing a new song
You can change your fate
It’s never too late

Esteban: But it is truly too late
To make up for my mistake
Pride had put my heart to sleep
But now I’m wide awake
I have hurt everyone
The damage is done
I cannot change my fate
It’s simply too late

Elena: We must look within
To see where We failed before
How can we change our ways
To even up the score?

[Speaking part]
Gabe: Well, we couldn’t beat them in a straight‐on fight.
Naomi: Except when Isa tricked that Shade into striking himself with lightning. Maybe we can trick the others into defeating themselves too.
Elena: That sounds like a good start.
Mateo: And I have a few ideas of how to send them back to the Spirit World. But you’ll need this.

Elena: We won’t be down and out
If we set aside our doubt
Because it is never too late
Esteban: I made a huge mistake
Elena: Find the will to try again
Esteban: My heart’s about to break
Elena: If you find what went wrong
And sing a new song
We can change your fate
It’s never too late
Never too late

Esteban: But for me it’s too late
To make up for my mistake
It’s simply too late

To All Coronation Day Songs

To All Season 3 Songs

Back To All Elena of Avalor Songs

It's Work to Be a King
Best for Our Guests
Athledecamathalon
What is a Baby?