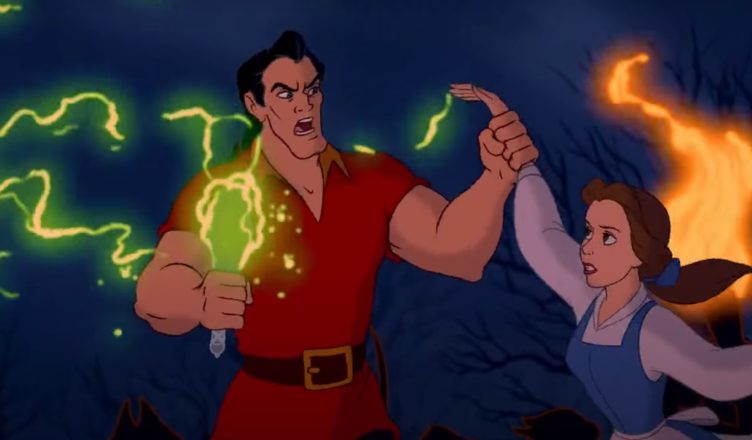 Gaston: The Beast will make off with your children! He’ll come after them in the night!
Belle: No!
Gaston: We’re not safe ’til his head is mounted on my wall! I say we kill the Beast!
Mob: Kill him!

Man 1: We’re not safe until he’s dead
Man 2: He’ll come stalking us at night
Woman: Set to sacrifice our children to his monstrous appetite!
Man 3: He’ll wreak havoc on our village if we let him wander free
Gaston: So it’s time to take some action, boys
It’s time to follow me!

Through the mist, through the woods
Through the darkness and the shadows
It’s a nightmare, but it’s one exciting ride
Say a prayer, then we’re there
At the drawbridge of a castle
And there’s something truly terrible inside
It’s a beast!
He’s got fangs, razor sharp ones!
Massive paws, killer claws for the feast
Hear him roar! See him foam!
But we’re not coming home ’til he’s dead
Good and dead! Kill the Beast!

Mob: Light your torch!
Mount your horse!
Gaston: Screw your courage to the sticking place!
Mob: We’re counting on Gaston to lead the way!
Through a mist, through a wood
Where within a haunted castle
Something’s lurking that you don’t see every day!
It’s a beast!
One as tall as a mountain
We won’t rest ’til he’s good and deceased
Sally forth!
Tally ho!
Grab your sword!
Grab your bow!
Praise the Lord and here we go!
Gaston:We’ll lay siege to the castle and bring back his head!

Belle: I have to warn the Beast. This is all my fault. Oh, Papa, what are we going to do?
Maurice: Now, now, we’ll think of something.

Mob: We don’t like
What we don’t understand
In fact it scares us
And this monster is mysterious at least
Bring your guns!
Bring your knives!
Save your children and your wives
We’ll save our village and our lives
We’ll kill the Beast!

Cogsworth:I knew it. I knew it was foolish to get our hopes up.
Lumiere:Maybe it would have been better if she had never come at all.
Lumiere:Could it be?
Mrs. Potts:Is it she?
Lumiere:Sacre Bleu! Invaders!
Cogsworth:Encroachers!
Mrs. Potts:And they have the mirror!
Cogsworth:Warn the master. If it’s a fight they want, we’ll be ready for them. Who’s with me? (Door slams) Hey!
[Outside]
Gaston:Take whatever booty you can find. But remember, the Beast is mine!

Mrs. Potts:Pardon me, master.
Beast: Leave me in peace.
Mrs. Potts: But sir, the castle is under attack!

Lumiere:This isn’t working!
Fifi: Oh, Lumiere. We must do something.
Lumiere:Wait, I know!

One thought on “The Mob Song”