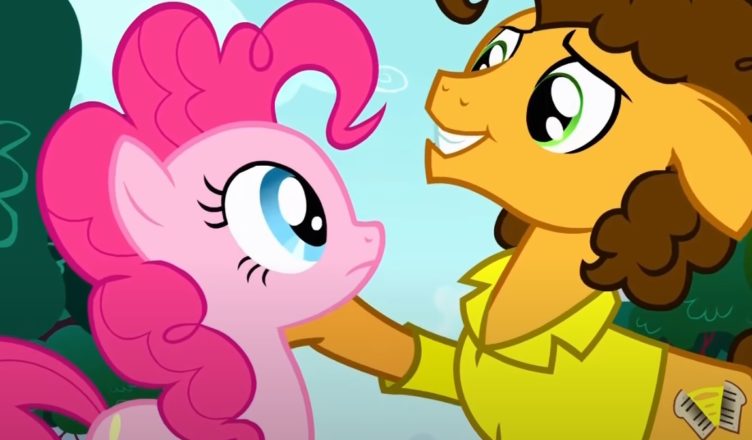 Cheese Confesses is a song from My Little Pony season 4 musical episode 12 “Pinkie Pride”. It is sung by Pinkie Pie and Cheese Sandwich and performed by Shannon Chan-Kent and “Weird Al” Yankovic .

Cheese Sandwich:
I fear I told a little fib about my pony past
I hope that when you hear the truth, you will not be aghast
I wasn’t quite the super party pony like I claimed
The fact is that I was so shy, nopony knew my name

I stumbled into Ponyville one afternoon by chance
And found the biggest ever celebration party dance
Everything was perfect, cheer was filling up the place
And I saw that everypony had a smile upon their face

I vowed that day to change my life, the past I did set free
For now Cheese Sandwich was a party pony full of glee
A super duper party pony — that’s what I became
I traveled all Equestria, and all did know my name

But that never would have happened on my own, I’ll tell you why
For the one who threw that party, it was you, Pinkie Pie

Pinkie Pie and Cheese Sandwich:
Super duper party ponies — that is me and you
A party thrown by one is good, but not as great as two
Come on and let’s join forces, have twice the expertise
Now let’s all go to the party planned by Pinkie Pie and Cheese!

Back To Other Season 4 Songs