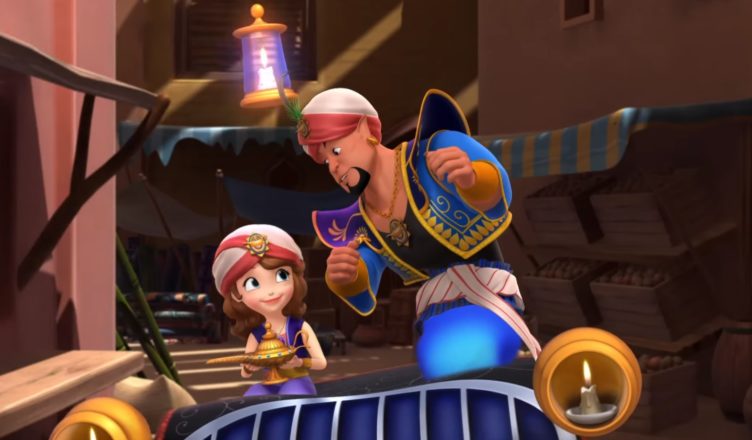 Genie Rules is a song from season 3 Sofia The First episode 7 “New Genie on the Block”. It is sung by Sergeant Fizz and Sofia and performed by Keith Ferguson and Ariel Winter.

Fizz: The number one Genie rule, without a doubt
Is you only grant wishes to the one who lets you out.

Now rule number two, simple as can be
You can grant three wishes, that’s one, two, three.

Rule three, when you’re done giving wishes away
You get back in your bottle with no delay.

These are the Genie Rules, so don’t you lose control
Or you’re gonna get a visit from the Genie Patrol.
That’s me Sergent Fizz and I know my biz.
I’ll pull up on my rug and make you take a pop quiz.
So all you Genies in the casbah, don’t be fools.
Just follow every one of my Genie Rules.

This is how we’re gonna track the genie down.
We’ll hop my magic carpet and fly around town.
We’ll be ace detective, follow every clue.
Looking out for anything too good to be true

And when that trail of wishes comes to an end.
We’ll have a naughty genie to apprehend.

He broke the Genie Rules.
Sofia: He lost all control.
Fizz: So he’s gonna get a visit
Both: From the Genie Patrol.
Fizz: That’s Sofia and Fizz
Sofia: And we know our biz.
Fizz: And how to fix this behavior of his.
We’re gonna send him off to Genie School
And teach him all 200
Both: Of the Genie Rules.

Back To Season 3 Sofia The First Songs